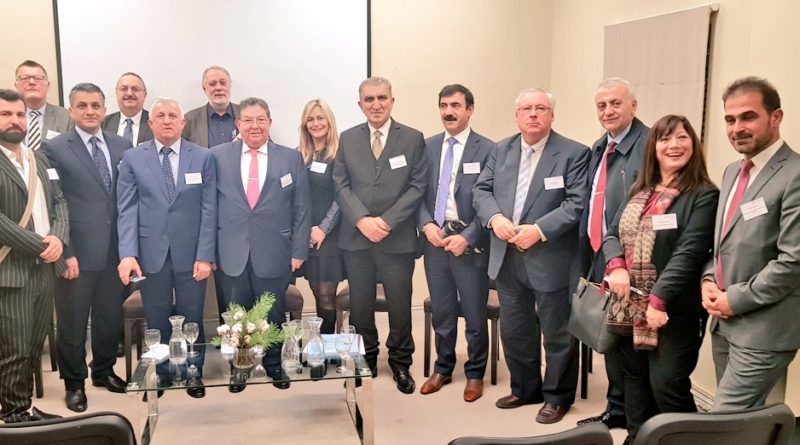 The delegation briefed a number of representatives of British businesses and members of the BEI on the economic and investment opportunities in the Kurdistan Region.

Derrick Sanyahumbi, Director at BEI, welcomed the delegation and said that their institution has more than 250 members and that they are working closely with the KRG UK in order to send a trade mission to the Kurdistan Region, and urged British companies to do business in the Region.

The KRG UK High Representative, Karwan Jamal Taher thanked BEI for organizing the event, which is an outcome of many meetings between the KRG UK and British Expertise International, and hoped that the mutual economic and trade relations between the two sides reach a higher level after the recent developments of the Kurdistan Region and successfully overcame the obstacles that faced during the last few years, as well as reiterated the KRG UK Office’s unlimited cooperation for any assistance.

the Head of Erbil Chamber of Commerce, Dara JalilKhayat highlighted the peace and stability that the KRG enjoys and investment opportunities for the foreign companies and said: “It’s time now for British companies to re-establish their presence in the Region and benefit from all the opportunities there.

He also stated that one of the obstacles in front of the improvement of the business relationship between the KRG and UK is the visa issue, and demanded the help of the relevant British departments, institutions and companies to make the process of visas easier for the benefit of the Kurdistan businesses.

Sirwan Muhamad, the Head of Sulaymaniyah Chamber of Commerce touched upon the historical relations between the UK and Iraq- Kurdistan Region briefed the audience on the investment opportunities in the Sulaymaniyah city and said that the Kurdistan’s investment law gives privileges to foreign companies and facilitates their businesses in the Region.

In his side, the Head of Duhok Chamber of Commerce, Ayad Abdulhalim pointed out that the Kurdistan Region is the most business attractive region in the Middle East that makes the main gateway for businesses in Iraq, and said that the companies in the Kurdistan Region can operate in Iraq too.

The Heads of Kurdistan’s Chambers of Commerce welcomed the initiative of a British trade mission to the Kurdistan Region and reiterated their cooperation for any assistance to make this success. They replied to the comments and questions of the British companies who have attended the meeting.