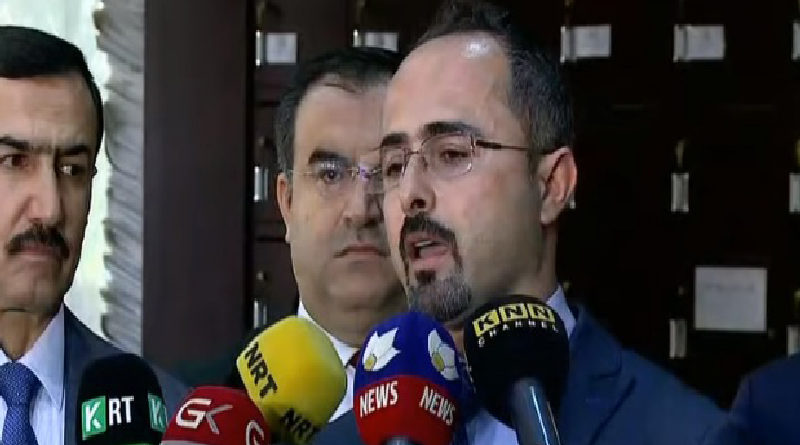 The Kurdistan National Union deputies registered a complaint with the Federal Court to resolve the issue of raising the flag of Kurdistan over the city of Kirkuk.

The MP from the Kurdistan Patriotic Union bloc, Piston Adel during a press conference in the presence of MPs bloc: Raising the flag of Kurdistan over the city of Kirkuk is a constitutional and legal subject, but some quarters and people are trying to mix the papers.

He added: ”Everyone knows that the Peshmerga forces have protected all components of Kirkuk and made great sacrifices under the flag of Kurdistan, but some parties are trying to turn the matter into a political issue.”

For his part, MP Rebwar Taha: ”The flag of Kurdistan was raised above the city of Kirkuk in the time of previous governments and there was no problem, the problem in Iraq is to interpret the paragraphs and articles of the Constitution in a mood.”

He added: ”Today we came to the issue of the areas to the Federal Court, and we filed a complaint against the governor of Kirkuk, an agency that issued an order to drop the flag of Kurdistan from some areas of Kirkuk through the use of force.”

He explained: “We want the regime in Iraq to be a democratic system that preserves the rights of all components. We are defending a people that is a major component of Iraq.”