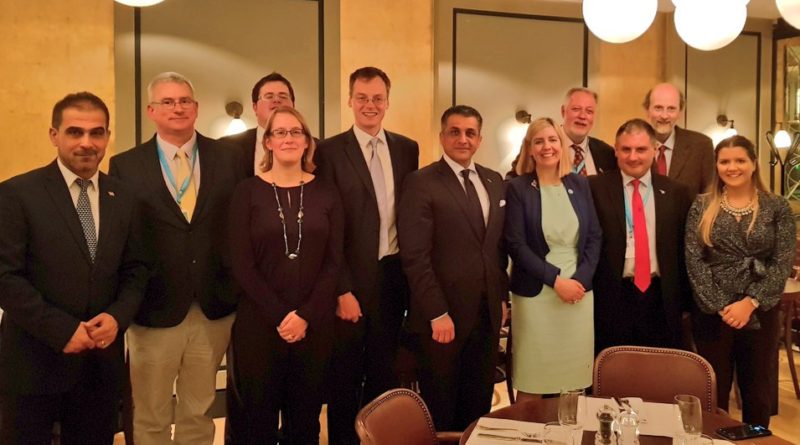 London, United Kingdom (uk.gov.krd). KRG High Representation delegation attended the Conservative Conference in Birmingham to observe its proceedings, meet new and old friends, and talk with diplomats from many countries.

The High Representative, Karwan Jamal Tahir discussed bilateral relations with the Foreign Secretary, Jeremy Hunt and invited him to visit the Iraq and Kurdistan Region at his earliest convenience. He also discussed relations with Foreign Office Minister, Harriet Baldwin and its work with Richard Graham MP, the Chairman of the Westminster Foundation for Democracy, which has in the past organised MPs’ visits to the Kurdistani Parliament, and he expressed his hopes that the WFD would begin new skills transfer work with the parliament that has just been elected.

The KRG delegation also meet the Leader of the Democratic Unionist Party (DUP) Arlene Foster on the margin of the conference, both side reiterated on further developing the relations between Kurdistan Region and Northern Ireland.

The High Representative also hosted a dinner to thank colleagues from the APPG on the Kurdistan Region, including MPs Jack Lopresti, Andrea Jenkyns, Michael Tomlinson and several Conservative activists.

Mr Tahir commented: “it is very important that we maintain links with the political parties as part of sustaining a deep and wide engagement with MPs and activists. I am pleased to say that there is considerable interest in the fortunes of the Kurdistan Region across the political spectrum and our work stresses the importance of the living link with the UK that is so dear to the people and leaders of the Kurdistan Region.”