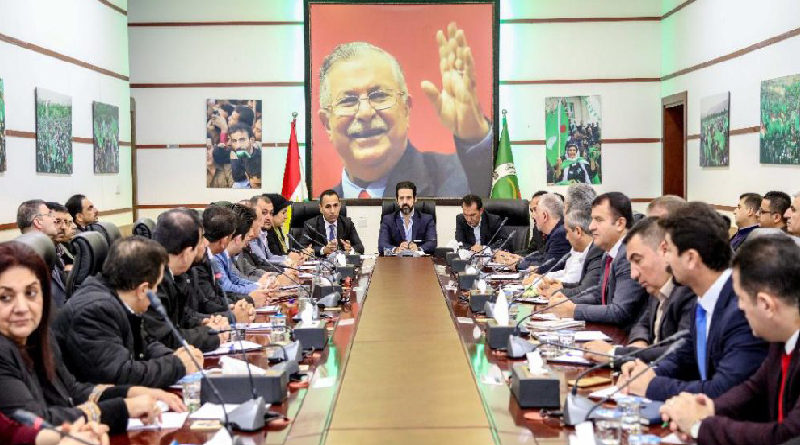 Qubad Talabani met on Wednesday 19/12/2018 with a number of cadres of the Patriotic Union of Kurdistan in the Office of the PUK in Sulaymaniyah.

Fahmy Burhan, member of the Office of PUK organizations in Sulaymaniyah spoke about the purpose of the meeting, which is to discuss the post-election phase and preparing for the mechanism of service delivery for the cadres of the PUK and the people of the Kurdistan Region in general.

For his part, Qubad Talabani thanked all cadres and members of the PUK and its centers for coordinating in the success of the list of the PUK, pointing out that there must be plans to provide more and better services to the masses of our people.

Talabani added that, “during the past years we have passed difficult stages and did not stop and worked hard and in the reform we have taken good steps and in the future will show good results towards the elimination of defects and provide services to citizens.”

As for the status of the Patriotic Union, Comrade Qubad Talabani explained that, “we must strengthen and renew the PUK in order to achieve stability and services and reduce the rate of unemployment and securing employment opportunities for citizens.”

He stressed that, “the PUK needs to hold its general conference and resolve the defects through the conference.”

On the formation of the new government of the Kurdistan Region, Talabani said that, “the PUK has its policy in every field of ​​the government, declaring at the same time that the responsibility to implement promises rests with us and we must take practical steps to implement the slogans and promises we have given to citizens.”

Talabani also stressed that, “the PUK is the holder of the slogan of stability, employment and service and that we have plans to implement them.”