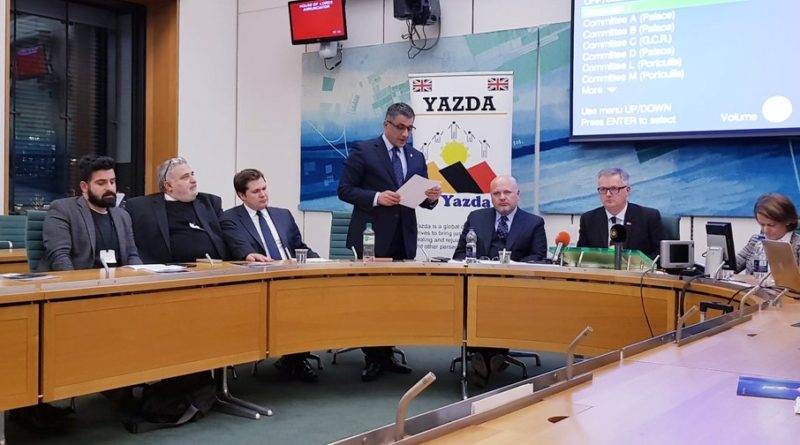 In his opening remark Ms Villa, read a chapter of her book on slavery and pointed out that Nadia Murad was one of the survivors she included in her book and she described her as “champion for everybody” and continued “she is such an extraordinary women only 21 years old and becoming what she is today and no one deserve the 2018 Nobel Peace Prize more than Nadia Murad”.

After, Mr Jenrick praised the courage and bravery of Nadia Murad for standing up for her community shows the world what ISIS has done to her and Yazidi community. He then said “as a child of holocaust survivor I know things can get better and communities can come back together and create next generations like me and siblings”. Mr Jenrick stated that “we gather here today to encourage the British government to take some actions to support Yazidi community international forums like UN to support them through the department of International development in their fund to protecting other persecuted religious minorities around the world and through cultural protection forums to protect culture, heritage and the cultures legacy of communities like Yazidis to be passed on to the future generation.”

In his turn Mr Khan, criticised the international community for not funding enough to support minority communities around the world, whereas they spend billions of dollars to send rovers on Mars. He then said “one massage that we hope will wake up each of us and to collectively be intolerant of intolerance otherwise we will have meetings such as this again and it will not be the Yazidi communities but could be other communities will suffer the similar fate”. He called for accountability of crimes, demands justice and action for Human Rights. “Actions speak louder than words” he said. Mr Khan stated that “the resolution that UN Security Council passed is very important because it recognised the link between ideology and a criminal group, it is the ideology or hate that creates the criminal group not the other way round and understanding of this reality is key if we want to get justice or to prevent further suffering”.

In his remark Mr Tahir, KRG’s High Representative to the UK said “We were in the process of curing the wounds of the genocide of the 1980s, and succeeded to achieve recognition by the new Iraqi federal court followed by several parliaments, Britain included.” But unimaginable happened he continued “ISIS emerged, waged unimaginably savage and despicable attacks against the people of Iraq, committing crimes containing all elements of genocide against humanity, civilization and religions, especially the Yezidi communities; the most affected people who suffered all types of crimes by ISIS.

Mr Tahir criticised international community for not working on the Yazidi case fast enough and said “There are many efforts to recognise these acts as genocide but the reasons and obstacles for not recognising these crimes are less well known – It seems that the international community is only prepared to symbolically pledge the recognition.” Therefore he urged everyone to “extensively, intensively unite the efforts to attain the justice and bring the perpetrators to trial, and for the UN investigation team to benefit from the KRG’s evidences and work with them collaboratively.”

Ms Abbas, is an human rights activist and author of ‘The Girl Who Beat ISIS’, and she is one of more than 6500 Yazidi survivors of ISIS enslavement and genocidean, Ms Abbas lost her family when the jihadist group swept through northern Iraq in the summer of 2014, killing and taking prisoner thousands of Yezidi people. She said ““As human beings we should feel ashamed, and international leaders should feel ashamed. There are many Fardia’s in the Yazidi community who come year after year with the same requests… I hope next year I will not come to share the same tragic story, but to thank you.”

Finally, Nawaf director of Yazda organisation in the UK, urged the UK government, Iraqi government and KRG to support the UN Team Investigating Islamic State Actions in Iraq to bring the perpetrators

The event ended by playing some traditional Kurdish songs.