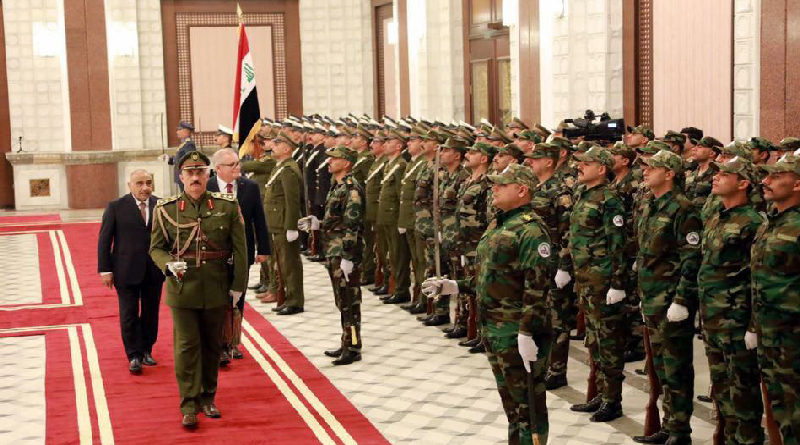 During the joint official talks, they reviewed the development of relations between the two countries and the two peoples and means of boosting them in the economic, trade, agricultural and cultural fields, and the Iraqi government’s direction of reconstruction after the success of Iraq in the liberation of its lands and calling for discussing the situation in the region and confronting terrorism and the importance of Iraq’s role in its region and good relations With all its neighbors and its Arab and regional surroundings.

The Prime Minister welcomed his Australian counterpart and his delegation and expressed his thanks for Australia’s support for Iraq in the war on terrorism and its support in defeating Al-Ra’id. He pointed out that the sacrifices of the Iraqis in the war were very great and expensive and reconstruction.

He said in the joint press briefing that followed the round of talks: “We look forward to continuing Australia’s position with Iraq and expanding cooperation to all sectors in order to enhance the interests of the two countries,” and “We hope the participation of large Australian businessmen and companies in the reconstruction of Iraq and the provision of employment opportunities. Diversity is a source of strength and we look at all Iraqis on the basis of citizenship and national identity. The Iraqi democratic experience is unique in the region. It has resulted in numerous elections and the peaceful rotation of power. We are keen to establish the best relations with our neighbors, Pain and not accept that our country is the seat of terrorism or a conduit for an attack on any other country.’’

The Australian Prime Minister expressed his happiness to visit Iraq and its stability and development. He reiterated his congratulations to the Prime Minister on assuming the premiership. He stressed that Australia is a friend of Iraq and has always supported his efforts to fight terrorism and will continue this support in all fields. Praising the victory of the Iraqi people for the promotion and reconstruction of Iraq, unification and development, and the government’s efforts to develop the economy and provide employment opportunities.

The Australian prime minister expressed readiness to start a new phase of cooperation to meet Iraq’s needs in the areas of economic development, construction, reconstruction, training, and humanitarian assistance.